by Razvan
in Dog medicine 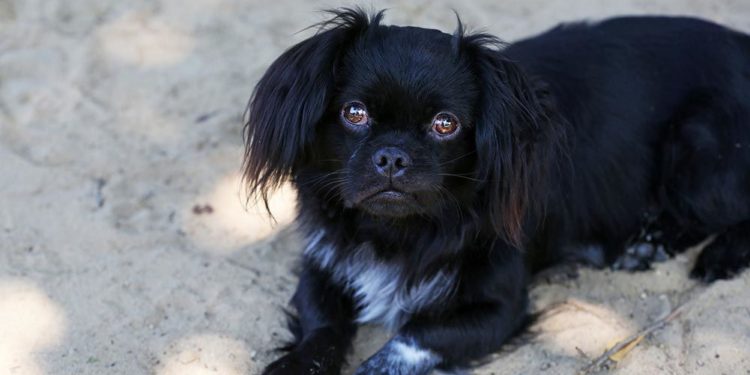 12
SHARES
5k
VIEWS
Share on FacebookShare on Twitter
This post contains affiliate links, and we will be compensated if you make a purchase after clicking on our links. Learn more.

Antihistamines are drugs used to counter allergic reactions in both humans and animals. The best antihistamines for dog allergies work by blocking histamine which stimulates cells in body tissues to react as a result of the body’s contact with the allergen. These allergic reactions are the body’s way of expelling the allergen in a bid to protect itself.

The body however has to be exposed to the allergen prior to it to be able to build antibodies against a specific allergen (antigen). Antibodies have memory and therefore with subsequent exposure to an allergen, it is able to produce antibodies specific to it.

Common signs of allergies include:

Allergies can be caused by food ingredients, environmental factors, parasites, and in some instances genetic predisposition.

How Do Antihistamines Help?

When the body is exposed to allergens an immune reaction ensues to protect the body against the ‘invader’.  Once the body is sensitized, blood cells called B cells produce plasma cells which in turn produce antibodies called IgE specific to that allergen. These antibodies in turn attach themselves on the surface of cells called mast cells which are produced during allergic reactions.

H1 receptors are found on epithelial cells, the brain, and smooth muscles and are largely involved in allergic reactions.

Histamine causes dilation of blood vessels through the epithelial cells causing an influx of blood which is often seen as redness on the skin and swelling. On the brain, it stimulates nerve endings causing increased sensitivity and itchiness. It also causes contraction of the smooth muscles in the bronchioles in the lungs which often leads to coughing and difficulty in breathing.

H2 receptors are found in the stomach and once activated the parietal cells are stimulated to produce an increased amount of hydrochloric acid. Other inflammatory responses include e.g. swelling, sneezing, tearing, rash, diarrhea, vomiting, etc.

These histamine effects are geared to help the body to expel the allergens though in prolonged satiations can lead to damage of body tissues. Histamine when released too fast into the bloodstream before inactivation by the enzyme known as histaminases results in a full-blown allergic reaction and anaphylaxis which can be deadly.

Second-generation antihistamines are preferred as they do not cause sedation and affect only specific H1 receptor sites in body tissues.

Safe Use of Antihistamines in Dogs

Antihistamines are not registered as veterinary drugs and should, therefore, be used under the guidance of a registered veterinarian. They should however not be administered in pregnant and lactating dogs, as well as those suffering from heart failure, glaucoma, bladder problems, prostate enlargement, and liver failure among others.

Dogs under treatment with tranquilizers, heparin, warfarin, amitraz, and epinephrine should not be administered antihistamines. Side effects such as dry mouth excess salivation, diarrhea, increased heart rate, drowsiness, and vomiting, etc. are common and mostly occur within the first hour after administration.

The most common and safest antihistamines in dogs contain the following active ingredients: Clemastine, Chlorpheniramine, cetirizine, hydroxyzine, and diphenhydramine. 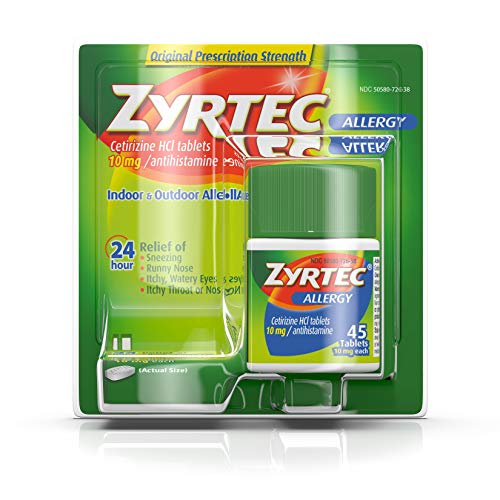 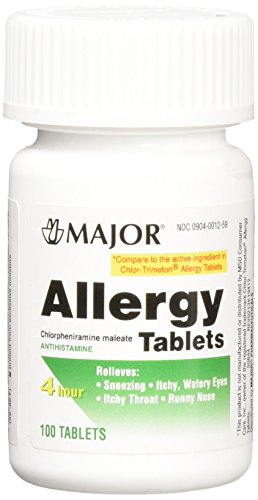 These are Chlorpheniramine 4mgs, 100 tablets used for relieving allergic reactions.

Chlorpheniramine maleate is an antihistamine drug that blocks the action of a neurotransmitter known as acetylcholine (anticholinergic) in the brain.

Acetylcholine on release at nerve junctions causes tearing, vomiting, runny nose, contraction of the muscles of the bronchioles in the lungs, urination, and diarrhea among others common in allergic reactions.

Chlorpheniramine comes in to block these effects, therefore, relieving runny nose, sneezing, vomiting, diarrhea, itchiness, etc. Each tablet contains 4mgs given at a dosage of 0.2 to 0.8 mg/kg every 8 to 12 hours. It can be given together with food.

It is however contraindicated in pregnant dogs, dogs that are allergic to the drug as well dogs with on acetaminophen and metoclopramide.

Chlorpheniramine is a suitable drug due to its quick action and long residual effects. It also has mild side effects. 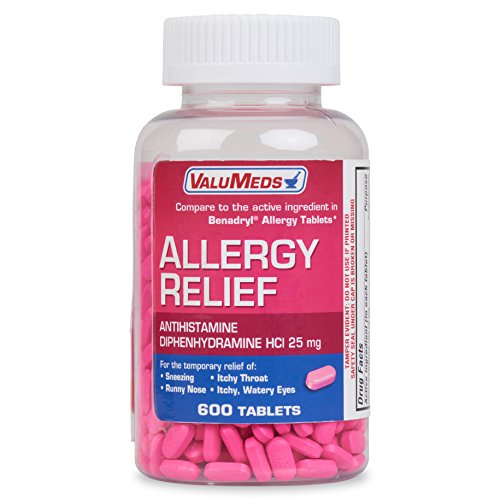 ValuMeds is an antihistamine drug-containing Diphenhydramine HCl as the active ingredient.

Diphenhydramine HCl blocks histamine from attaching to both H1 receptor cells as well as inhibiting the neurotransmitter acetylcholine released on nerve junctions. It, therefore, prevents cholinergic and histamine effects common in allergic reactions such as watery eyes, swelling, vomiting, nausea, motion sickness, and diarrhea among others.

It also causes mild sedation. It has no effect on pregnant bitches but should be restricted while lactating. It is also contraindicated in pets suffering from heart disease, glaucoma, therefore, best used under the guidance of a veterinarian.

It is given at a dose of 1mg per pound 2 to 3 times a day. It also comes with its fair share of side effects such as dry mouth, urinary retention, hypersalivation, increased heart rate, etc. It also induces sedation therefore also prescribed in dogs with anxiety.

Zyrtec is an antihistamine drug used to relieve allergies with cetirizine hydrochloride as the active ingredient.

Cetrizine is an antihistamine. It attaches itself to H1 receptor cells in body tissues preventing their activation by histamine during an allergic reaction.

It is a second-generation antihistamine meaning it does not cross the blood-brain barrier therefore does not cause drowsiness or sedation. It may cause side effects such as dry mouth, nausea, vomiting, and diarrhea, etc.

It should not, however, be prescribed in dogs that are hypersensitive, pregnant, and lactating bitches as well as dogs with liver or kidney failure. Cetirizine should be given at a dose of 1miligram per kilogram once daily under the guidance of a veterinarian.

Cetrizine is a second-generation med that does not cause drowsiness, unlike 1st generation antihistamines. Zyrtec is effective in treating atopy and allergic dermatitis in dogs. 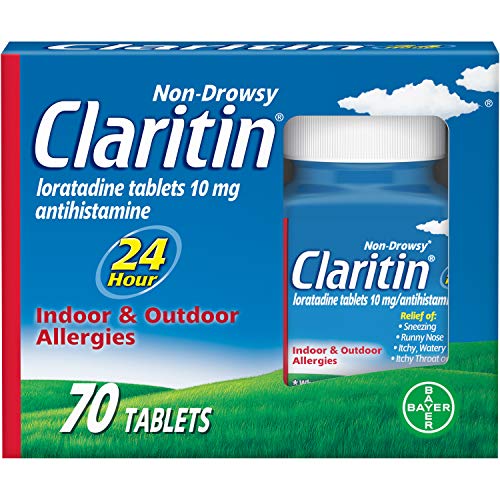 It acts specifically on peripheral H1 receptors and not those found in the brain therefore not causing drowsiness and sedation. It reaches peak blood levels in about 2 to 3 hours. It is broken down by the liver therefore not indicated in dogs suffering from liver failure.

Care should be taken when purchasing to avoid loratadine containing pseudoephedrine as it is harmful to dogs. It should be given under the guidance of a veterinarian, especially in pregnant or lactating bitches.

It should also not be given concurrently with other antihistamines. Liquid versions of the same drug should also be avoided as they contain alcohol which is toxic to dogs. The recommended dose is 0.2 mg per pound once daily. The duration of use depends on the severity of the allergy. 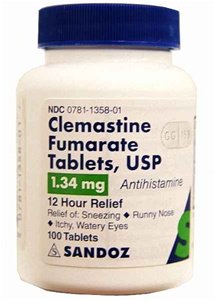 This antihistamine medication contains clemastine fumarate as the active ingredient.

Clemastine works by blocking H1 receptors found in body tissues from being activated by histamine preventing its effects on the body. It also blocks the neurotransmitter acetylcholine providing relief from allergic symptoms such as watery eyes, runny nose, diarrhea, and vomiting among others.

It also crosses the blood-brain barrier causing drowsiness and sedation. It is however contraindicated in animals with heart disease, glaucoma, prostate, and bladder infections. It safe for use in pregnant bitches but traces of the drug have been found milk, therefore, contraindicated in lactating bitches.

The recommended dose is 0.5 milligrams per kilogram given every 12 hours. Common side effects include hyperactivity, dry mouth, redness of the skin, and sedation. It is not a registered veterinary drug therefore should be administered under the guidance of a veterinarian.

Most antihistamines are not registered as veterinary drugs therefore should be used under the guidance of a veterinarian. Most veterinarians prescribe drugs with the following active ingredients: Clemastine, Chlorpheniramine, cetirizine, hydroxyzine, and diphenhydramine among others.

Care should be taken when administering the drug to pregnant and lactating bitches. It is also contraindicated on dogs suffering from heart failure, glaucoma, liver failure, and bladder problems. Antihistamines should not be administered concurrently with tranquilizers.

The duration of use is determined by the severity of the allergy. In the event of adverse side, effects the administration should be discontinued and a veterinarian contacted. Read our comprehensive guide on Dog Medication here.

Here are the ratings of the top 5 antihistamines for dogs with allergies. 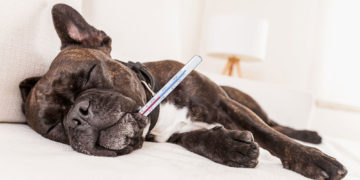 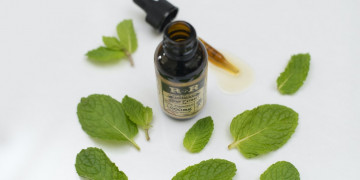